As Happened with Christianity,
Islam was the Product of Manipulated Syncretism

One of the first deceiving tales told to bamboozled American students about Islam is that Allah,  the Muslim god, is the same as the Almighty Creator, the G-d of Israel, blessed be He.  Islam’s character and philosophy is much too different  from the one observed in the Jewish religion for the alleged connection to be reasonable in the very least.  Consequently, there has never been a satisfactory answer concerning the origin of the “god” of Mohammed, who seemed to just spring out of the mountain cave with Mohammed’s visions and co-opt and rewrite the stories of the Bible, creating a perverted  version of Jewish and Christian beliefs that calls on Muslims to convert everyone or destroy the entire world.

Author Theodore Shoebat has  an interesting theory, however, and like most “a-ha!” moments, it was hiding in plain sight, apparently ignored or, worst yet, kept under wraps by scholars.

Shoebat traces the earliest mention of Allah worship to Babylon,  approximately 1700 B.C., in the “Epic of Atrahasis.”  In the story told on stone tablets, a portion of the legends talks about a “god” named Alla, who is described as a “god” of “violence and revolution.”  Now, that is a character that does fit Islam!

In one scene, the lesser “gods” grow tired of working for the “god” Enlil (or  Elil) and rebel, led by the “god” Alla, who encourages them to drag Enlil out of  his house:

“Then Alla made his voice heard and spoke to the “gods,” his brothers:  ‘Come!  Let us carry Elil, the counselor of “gods,” the warrior, from his dwelling.  Now, cry battle!  Let us mix fight with battle!’  The “gods” listened to his speech, set fire to their tools, put aside their spades for fire, their loads for the “fire-god,” they flared up.”

[ One aside interesting note in reference to this is that Enlil in Mesopotamian myths is the “god” who was said to  have grown weary of the noise made by humans and brought down a worldwide Flood  to get rid of them, a Flood which was said to be survived by one man,  Utnapishtim (known as Noach in the Jewish tradition), and his family, who were spared because they had a boat loaded with  animals and food. ]

The cult of Alla came to Mesopotamia with the Akkadians, who originally migrated from the area now occupied by Yemen in the south Arabian Peninsula.  Shoebat further reports that there is a Sumerian inscription identifying Alla with Tammuz, who was a “god” of fertility and the consort of Inanna, who is identified  by scholars with Ishtar, Venus, Isis and other goddess cults like the one syncretized by Catholics, Mary. The various goddess cults are frequently identified with the moon, although not always.  And Tammuz was said to be an archer, both of which points may help explain the crescent symbol of Islam.

“14  Then He brought me to the gate of entrance to the House of HaShem toward the north; and, hinei (lo), there sat nashim (women) weeping for Tammuz. 15  Then He said to me:  ‘Have you seen this, ben adam (son of man)?’  Turn yourself yet again, and you shall see to’evot gedolot (greater abominations) than these.”

“Weeping for the “god” Tammuz” refers to one of the annual festivals of the cult,  in which the “god” was said to be killed, remain dead for three nights and three days, and then resurrect.  It is worthy to remark that this story is thousands of years older than the Christian story which it resembles so much.

Being a fertility “god,” the “killing” was  a metaphor for the summer and the annual dying of the crops. The other major  festival had to do with the “god”’s “marriage,” which presaged a fertile year for  farmers. Both festivals were apparently marked by rituals that included sex with  the temple priestesses, thus their reputation would have been shocking to the ancient Israelites.

That chapter of Ezekiel details a vision which in part shows the north gate  of the Temple, that is marked by the “idol that provokes to jealousy.”  The Vision also describes idol worship being secretly conducted inside a room of the Temple, and then it goes on to say, in Ezekiel 8.16-18:

“16  And He brought me into the Court of the Kohanim inside HaBeit HaShem (The House of HaShem, The Temple) and, hinei (lo), at the entrance of the Heikhal HaShem (Sanctuary of HaShem), between HaUlam (the Entrance) and HaMizbe’ach (the Altar), were about 25 men with their backs toward the Heikhal Hashem(Sanctuary of HaShem) with their faces toward the east; and they were bowing down toward the east worshiping the sun.  17  Then He said to me:  Have you seen this, ben adam (son of man)?  Is it a trivial thing to Beit Yehudah (the House of Judah) that they commit the to’evot (abominations) which they commit here? Since they have filled Ha’Aretz (The Land, i.e., Israel) with chamas (evil), and yet have returned to provoke Me to Anger; and, behold, they put the branch to their nose, 18  Therefore I will also deal in chemah (Fury).  My eye shall not pity, neither will I spare; and though they cry in My Oznayim (Ears) with kol gadol (a great voice), yet will I not hear them.’”

Fertility cults such as this were common among the Canaanites and other peoples  around Israel. The Bible mentions many times the Asherah poles, which were also a  religious symbol of just such a cult.

The Arabs, from whom we get Islam, consider themselves to be descended from  Ishmael, Abraham’s son by Sarah’s slave, Hagar.  In Genesis 16.12, it says the following of  Ishmael:

“12  And he will be a pere adam (donkey-man, i.e., a savage man); his yad (hand) will be against kol (all), and kol yad (all hand) against him; and he shall dwell in the presence of all his brethren.” 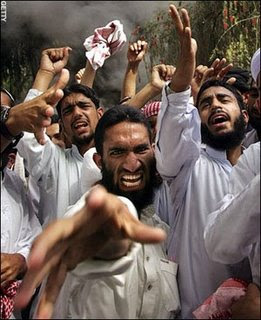 Yes, studying the past can give us an insight into matters of the past and today’s violence in the Midlle East.